My name is Anna, I’m 53, a mother of two boys, a Trustee and founding member of OBBG, and I have been living with secondary breast cancer (BC) – cancer that has spread to other organs – since 2017.

My BC story started out in late 2012 with a triple positive primary diagnosis. I had a lumpectomy and a couple of lymph nodes out, chemo, radiotherapy, Herceptin for a year and Tamoxifen for 5. I underwent an elective double mastectomy with reconstruction, which didn’t quite work out as planned but isn’t something I regret doing. Everything was relatively back to my new ‘normal’ within a year of treatment. I travelled, ran half Marathons (one raising money for OBBG) and generally got on with life. I navigated the post-treatment ‘wasteland’ (where medical support ends), as I call it, and the ever-present health anxiety demons with the help of my wonderful support network and the solidarity in understanding that OBBG brings.

But it wasn’t, I had treatment options, and with any options there is always hope. So, more chemo (docetaxel), Herceptin for as long as it works every 3 weeks, exemestane instead of tamoxifen and various other monthly or quarterly injections. I tried Pertuzamab, the HER2+ve wonder treatment of the time, but was unfortunately allergic to it so Herceptin was my best bet. And it paid off, thankfully – for 3 years now my liver and bones have been stable, you could say in remission. Life continued as before, even with another half Marathon! I also saw an eclipse, which was an amazing once-in-a-lifetime experience, and tried to maximise time with my family and friends.

But in April last year I fitted whilst doing a virtual 10k race. An MRI showed I had 41 tumours in my brain. Again came the thought ‘this is it’. But it wasn’t. It isn’t. Nearly a year later I have had several rounds of radiotherapy, which seem to have done a brilliant job so far, reducing or obliteration most of the tumours. I am still here and I am still me (minus hair – but I have great wigs!), slower and less stamina, but still able. I never take for granted how lucky I am that my treatment seems to be working thus far. But I live with the knowledge that it could change at any moment.

I am a bit scared to resume running, although I’m told I could, but I do challenges with Great Run each month (I walk) and have got 7 medals so far – including one for the race I fitted in. They said I could walk the remaining distance (I fitted at 6.5k of the 10k run) and I did it! Best medal ever… 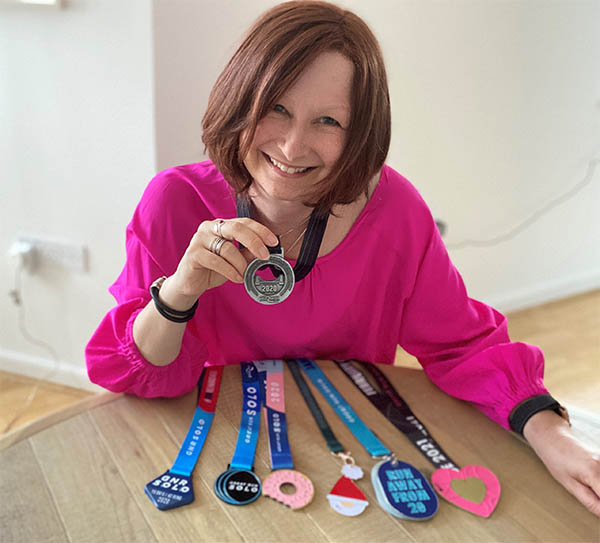 I really believe that exercise, even if it was walking slowly for 10 minute round the garden during chemo, has helped me weather much of this storm physically. And mindfulness has often helped me mentally – for example, during a 4.5 hour targeted radiotherapy session recently mindfulness was invaluable! As are the weekly Wednesday Zoom session with Bruce. Mindfulness reminds me to stop and take things in, to savour experiences – to not just rush by.

Getting a diagnosis during lockdown makes an otherwise challenging time worse, no matter the stage or treatment plans. Thank goodness for Zoom and the like! It’s a lonely place but it’s made less lonely knowing that there are others out there –  all with different diagnoses, but with similar understandings of what it means to have BC. That’s why OBBG can be so brilliant, especially for those having to endure lockdowns alone. My boys (now early 20s) self-isolated and came home so I was not alone through any shielding, but I appreciate that others weren’t so lucky and I hope some have found OBBG and gained something positive from it.

So here I am, nearly 9 years from my first diagnosis and nearly 4 from by secondary diagnosis. I still have treatment options and more are coming out every year. Getting drugs, such as Herceptin, in to the brain is often difficult as the brain has a barrier specifically to protect it than doesn’t allow larger drugs through. But there are now drugs that can get in to the brain and there is a bit of a wonder drug that does just that for HER2+ve people like me which is due to be approved by the end of this year. So I still have options, and therefore I still have hope.

Having secondary BC means always having to put out fires. It can be extremely challenging at times, but it is not necessarily ‘that’s it then’ and life can, and does, go on. I have incurable secondary BC, but I am not yet terminal. And for that alone, I am extremely lucky.